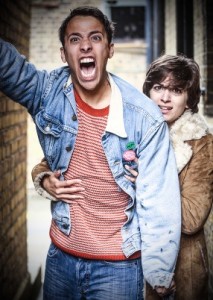 “Nunn immediately jumped out as one to watch, a flawless young actor with huge things ahead. With flatcap, grin and a sort of cocky, working class, street attitude, he’d be a perfect fit for Peaky Blinders or Ripper Street. But even if he’d been cast as Romeo here he would have excelled just as well…. James G. Nunn and Dan Dawes as Benvolio and Mercutio, daft drunk lads with not the slightest idea or care of what lies ahead, have a wonderful chemistry, energy and spot-on comic timing that brings explosive laughter from the crowd.”
(C) Sarah Cox, Stage Review ***** (5 Stars)

“The acting throughout is phenomenal, as the cast moves easily between comedy and tragedy, and they all handle Shakespeare’s language with aplomb.”
(C) Nicola Watkinson, Plays To See ***** (5 Stars)

“There’s plenty of laughs in the first half with Dan Dawes and James G. Nunn having a lot of fun with lads about town Mercutio and Benvolio; The familiar lines are delivered beautifully, and the comedy and tragedy get full value.”
(C) Gary Naylor, Broardway World