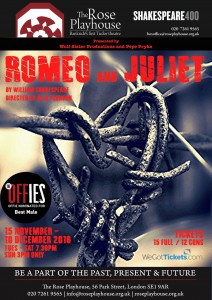 “The star performer is James G. Nunn as Romeo. Nunn’s emotional and expressive range is phenomenal, and well beyond that normally gifted to the character. He soon renders the audience helpless at his feet as he barrels his way through the story.”

“The vivacity with which they [The Cast] approach the text is truly captivating. A good edit and some phenomenal performances hovering on the edge of the Elizabethan remains of the Rose Playhouse make this Romeo and Juliet quite a special one.”
(C) Laura Kressly, The Play’s the Thing UK

“Here the lovers are played with gusto, the intense Nunn, wild-eyed and fearless, throws himself about the stage and audience seating with reckless abandon. At one point he was under my feet before plonking himself down next to me to hand deliver his lines.”
(C) Anne cox, Stage Review **** (4 Stars)

“In this sense of its style and pacing, it is arguably a better Shakespeare play than most seen at the Globe’s Wonder Season and better Romeo and Juliet than Kenneth Branagh’s high-profile Garrick production in the summer… It is one of the most genuinely engaging and moving pieces of theatre seen this year, and highly recommended as an excellent example of Shakespeare’s relevance and power today.”
(C) Carmen Paddock, Theatre Bubble **** (4 Stars)

“The renowned balcony scene between the two lovebirds is full of mischief and light with young love. An exciting, and invigorating introduction to Romeo and Juliet’s lust which makes this 418 year old story feel brand new. James G. Nunn and Rhiannon Sommers fuel this effect on the audience.”
(C) Scatter Of Opinion, Theatre Reviews **** (4 Stars)

“James G Nunn and Rhiannon Sommers are a Romeo and Juliet for our times. Less innocent sweethearts, more confident young lovers. Whether it’s Juliet swigging on her hip flask, or Romeo hiding in the audience, Sommers and Nunn give very relatable portrayals of two young people who have immediately taken a liking to each other. The love story at the centre of the play has the potential to be quite saccharine, but there is none of that in this production. It has a very modern and believable feel to it.”
(C) Mind The Blog **** (4 Stars)

Bravo @RosePlayhouse for a storming end to a great year of theatre. @WolfSisterProds superb R&J should not to be missed. @JamesGNunn excels!

@Ro_Ju2016 / Truly the best production I’ve experienced in London. I am simply in awe of the effort, the talent, and the art. @JamesGNunn

Great work from @JamesGNunn in Romeo & Juliet @RosePlayhouse the man puts in a brilliant performance!top show worth seeing!