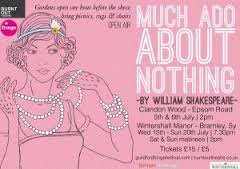 BurntOut Theatre’s Much Ado About Nothing

“In an idyllic corner of the Surrey Hills, an audience was treated to an afternoon of pure entertainment on 5th July. In a meadow full of daisies and ladies’ lace we sat beside a still green lake while wit and an improbable story of young lovers and a villainous plot played before our delighted eyes. Lydia Huhne played Beatrice with huge gusto as the kind of free-spirited, quick-witted, straight-talking warm Surrey girl that lovely, giggly Hero (Clemmie Reynolds) needs in her dealings with the other sex. Hero’s first encounter with Claudio (played by James G. Nunn as a callow youth who makes good by the end of the play) establishes her as a charming, highly susceptible young lady in need of a good friend like Beatrice.”
(C) Janice Windle, Trinity Mirror

“A charming and talented cast performs one of Shakespeare’s best comedies on a perfect summer’s day. While a great amount of planning and rehearsal has gone into this production, it feels spontaneous and evokes one of the great Hollywood musical clichés….let’s put on a show…let’s do it right here!! It was a delightful way to spend a Saturday afternoon and I would thoroughly recommend it to any theatregoer. Take a picnic with you and enjoy some great performers in action. With most of the cast doubling up, the pace of costume change was remarkable as they discreetly emerged from behind a green canopy. The cast was excellent throughout and coped admirably with the distractions of performing outdoors. Half of London’s pigeon population seemed to descend on us; dogs barking, babies crying and mobiles going off were all major offenders. But nothing distracted the cast who remained word perfect, even using canine interference to adlib at one point. They showed enthusiasm and a masterful command of story and script.”
(C) Everything Thetare **** (4 Stars)

“This is picnic-Shakespeare, sitting on the grass in a corner of Russell Square gardens while the actors and musicians whisk the audience back to a familiar version of the 1920s – carefree toffs in boaters, drop-waist dresses and the all-important jazz soundtrack that supposedly heralded a new age. Burnout Theatre is a company of RADA graduates performing classic plays in unusual surroundings … The second part had more drama as James G. Nunn’s suitably outraged Claudio rejects Hero at their wedding and then discovers his mistake. The design and setting is one of the best things about the production which transfers almost convincingly to the era of the flapper and the Charleston, and seemed to suit the warm afternoon in central London. The adaptor had cleverly altered Shakespeare’s places to reference the local area which helped to make this a very British affair in look and feel.”
(C) Maryam Philpott, The Public Reviews