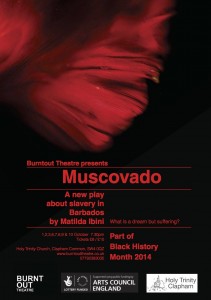 “The acting was strong from all on stage however James G. Nunn gave a particularly outstanding performance as Parson Lucy. His portrayal of a character who embodied the hatred and prejudices that justified the transatlantic slave trade for centuries, and in some ways discrimination in our modern age was a triumph. One might say he played the perfect “baddie”.
(C) Ronke Lawal, Afridiziak Theatre News **** (4 Stars)

“There is much to applaud in this stirring atmospheric production. It attempts to grapple with each character’s slavery story, black, white or mixed race. Woman and man. In so doing we see more than the slavery itself, we see family, relationships, ownership and ultimately life. We see tragedy wrapped up in barrenness and loss and humanity’s desperate attempts to compensate empty guilt-riddled existences…This isn’t theatre for the faint-hearted – it’s gruelling stuff.”
(C) Katie Richardson 2014, Female Arts **** (4 Stars)

“Muscovado succeeds in telling a complex multi-layered story of pain felt by both slaves and masters whose depth this review can only scratch the surface of. It is an uncompromising portrayal of slavery in all its brutality while also offering an alternative narrative that restores the humanity slaves are often denied in modern day tellings, going beyond the realms of servitude.”
(C) Ella Achola, Media Diversified **** (4 Stars)

“This production of Muscovado is a truly visceral experience. The sweat dripping from the bodies of the actors, confessions in candlelight and sacred song combine to make this church -although a world away from Barbados- a fitting and intimate space to witness”
“The only examples of a white male are portrayed in Parson Lucy and Unknown Fellow played by James G. Nunn. Both characters are the archetypal evil. Nunn was convincing in making the repulsive hatred a difficult watch.”
(C) Robyn Bennett (THE BAIN REACTION)